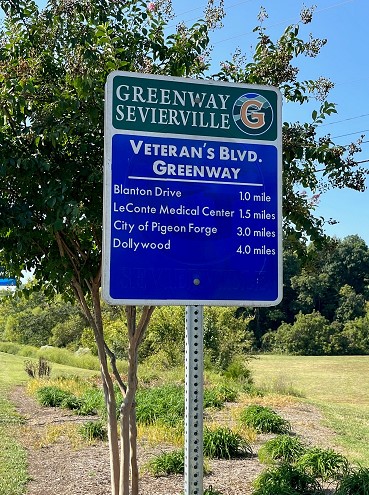 The City now has new wayfinding signs for welcoming at the City limits, the municipal campus, historic landmarks, and the greenway system, providing citizens and visitors consistent signage whether they are driving, walking, running, or riding a bicycle in Sevierville.

There are two types of greenway wayfinding signs; ten signs are located along major roadways designating greenway locations, and numerous signs on greenway trails provide greenway names and distances to various points throughout the greenway system.

Sevierville’s first greenway opened in 1998 and the City now has twelve miles of developed greenways located along rivers, within parks and parallel to major roads. The Sevierville Parks and Recreation master plan recommends continued development of greenways with the goal of increased connectivity throughout the City.