The West Prong Greenway was a vision of the Late “Sid” Wade-First Chairman of the Sevierville Tree Board in the 1980’s; and brother to former Mayor and now Tennessee Supreme Court Justice Gary Wade. Sid Wade was able to raise over $50,000 dollars from the private sector for this project. 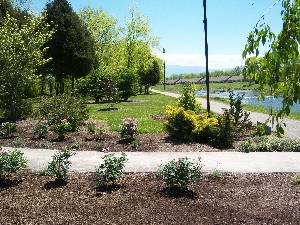 Sid Wade worked for Delta Airlines and traveled all over the world and he saw what other communities had done with water fronts and non-developable property by developing Greenways. After his death, the Tree Board and new Chairman Bob Parker used these private funds toward the required local match to obtain two state grants to build the first phase of the West Prong Greenway. The West Prong Greenway opened in the mid 1990’s and is located on both the west and east banks of the West Prong of the Little Pigeon River between the Gatlinburg Highway Bridge and the Chapman Highway Bridge. Most of the landscaping and trees on this Greenway have been donated through private funds using the Memorial Tree Program which is administered by the Trees/Trails & Beautification Board.

The Parks and Recreation Department will make every effort to accommodate anyone desiring access to any facility including ADA Approved Listening Devices. For accessability assistance, please call 865-453-5441.